The HyperScout instrument, partly developed by cosine Remote Sensing under an ESA InCubed co-funding activity, has been adopted as the hyperspectral imager of choice for Australia’s first satellite mission funded at state level. Scheduled for launch in 2022, the Kanyini is based on a 6U CubeSat platform and is being engineered by SmartSat CRC and two South Australian companies.

The SASAT1 Kanyini project is aimed at promoting and developing the South Australian space industry through the launch of a CubeSat nanosatellite with Earth observation and Internet of Things (IoT) payloads. With funding from the South Australia state government, Kanyini is a collaboration between local entities the SmartSat Cooperative Research Centre, Myriota and Inovor Technologies.

Data collected from the project is intended to support informed decision making in the areas of water usage, climate policy and disaster management. There is also an associated educational programme, which commenced with a competition in schools to name the satellite itself. The winning entry, ‘Kanyini’, is a Pitjantjatjara aboriginal word that describes the principle of responsibility and unconditional love for all of creation.

The HyperScout 2 is a three-in-one instrument that combines hyperspectral and thermal imaging with high-level data processing and Artificial Intelligence (AI) capabilities. Available for deployment on satellites of any dimensions, the imager is however particularly suited to small platforms built around a smart blend of custom-made and commercial off-the-shelf (COTS) components. The HyperScout series was designed and brought to production by the Remote Sensing business unit of Dutch company cosine, with initial co-funding support provided by the Dutch government through the Φ-lab InCubed programme.

“We needed a compact imaging payload that gave us a much more nuanced Earth view than a three-band sensor,” explained Pete Nikoloff, Kanyini Mission Director at SmartSat. “The spectral range of the HyperScout 2 enables an extremely detailed analysis of land cover, benefitting research into crop health, forests, inland water and coasts, while the thermal infrared imager will provide vital information on heat generators in South Australia. In parallel with the development phase, a research programme is being formulated with SmartSat’s partners to make the best use of the systems once in orbit.”

ESA Scout System Manager Massimiliano Pastena sees a crucial link with the ethos of the Φ-Department: “We’re very happy that HyperScout 2 has been selected for Kanyini, as it provides another example of an InCubed-supported initiative that subsequently grows and enjoys take-up at a global level. We also found the name of the satellite, with its reference to care and responsibility for our planet, an inspired choice that matches well with our approach to future Earth observation.”

“The purpose of the ESA InCubed Programme is to support and develop the commercial EO sector  through de-risking business-focused products and services along the EO value chain,” added ESA InCubed Programme Manager Amanda Regan. “Improving Hyperscout was one of the first InCubed activities and is a good case in point of where we were able to help de-risk a commercially focused development. We are very pleased to see that Hyperscout 2 has been picked up by the Kanyini project and we wish them every success.” 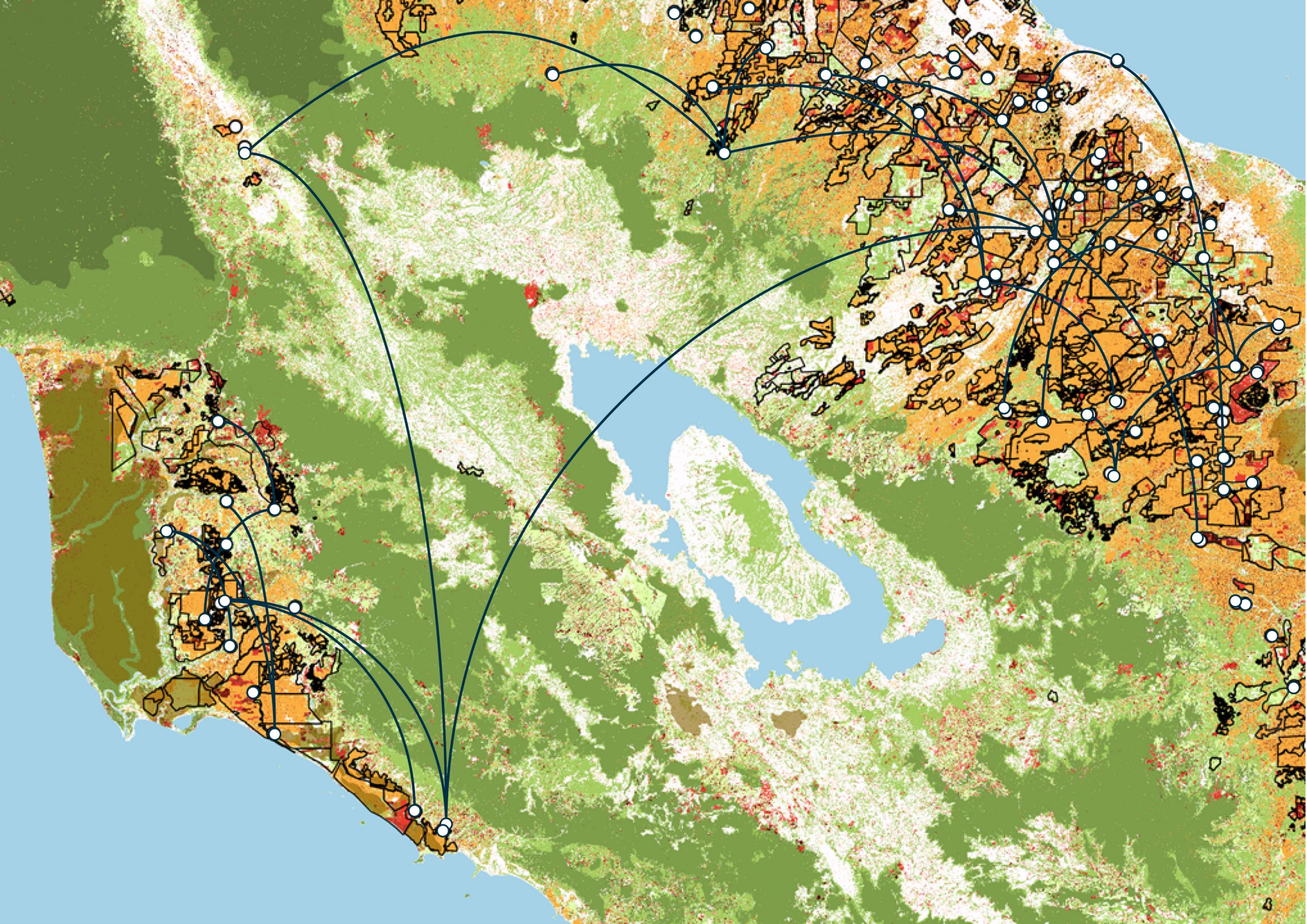 After a successful development activity co-funded by InCubed, Satelligence has launched Deepview. Underpinned by Copernicus and contextual industry data, the service enables companies to progress their sustainability commitments by tracking deforestation risk in the supply chain.

Deforestation was at the forefront of the recent COP26 in Glasgow, with over 100 governments signing a pledge to end and reverse forest loss by 2030. But commerce also has a major role to play, and companies with credible sustainability policies need to ensure that their environmental stewardship extends to their suppliers. Maintaining vigilance over vendor processes and sources reduces risk and empowers organisations to make informed procurement decisions.

Satelligence is well placed to support such vigilance. The Dutch company has used its remote-sensing data expertise to build Deepview, an innovative service that maps the web of relationships between producers, traders and goods manufacturers so that companies can pinpoint areas of deforestation risk throughout the value chain.

As Head of Client Relations Nanne Tolsma explains, the service is a powerful tool for its users: “Deepview provides companies with new layers of meaningful supply-chain engagement while allowing them to demonstrate a commitment to internal and external transparency. This is an essential step towards the achievement of satellite-based supply-chain traceability for sustainable agricultural production.”

The main focus of Deepview is currently the palm oil supply network of large traders and consumer goods companies, but the solution can easily be scaled to other commodities.

Kicking off in February of this year, the Deepview initiative began by interviewing a large number of businesses to better understand their environmental risk monitoring needs and requirements in often complex supply chains. Several companies were then selected for demonstrations on how their palm oil suppliers could be monitored, after which the iterative development of the web application prototype began in earnest. The result is an off-the-shelf tool that is now production-ready for commercial use, with several food giants among its early adopters.

“InCubed has enabled us to complete early testing of our solution across a wide cross section of companies and to drive our market introduction forward at a time when deforestation is garnering considerable international attention. We are very grateful to ESA and the Netherlands Space Office for their continuing support,” Nanne Tolsma adds.

The ESA Technical Officer for the activity is Frank Martin Seifert: “Deepview is a prime example of how Earth observation can be at the forefront of real-time environmental oversight while also forming the basis for value-added commercial applications. We’re happy to have provided InCubed funding for an initiative that is win-win-win: beneficial for the profile of EO, for industry and above all for the health of the planet.”